What is your nostalgic song?

Symbols of an Era! Here are some famous hit songs that represent the Heisei era. 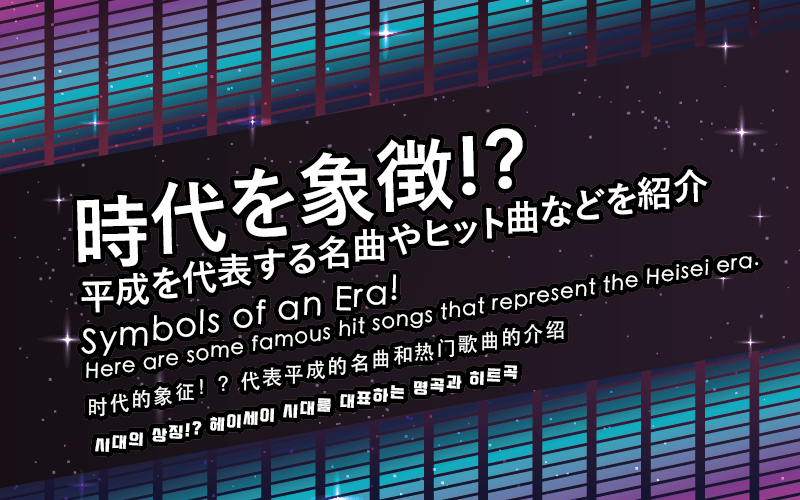 If Enka （traditional Japanese ballads） were the songs that became hits during the Showa era(1926-1989).Then what kind of songs became hits during the Heisei era?  This might be when J-POP came to be on top. This was also when a lot of foreigners came to Japan so some of those hits might have reached their ears as well.

In this article I would like to introduce some famous hits that represent the Heisei era (1989-2019).

Countless songs were created during the Heisei era; many of them became popular hits. I have given the emphasis on songs that have survived both on record and on our  memories and carefully selected 5 of them, which I will introduce here.

This song was originally released in 2002 as a track in one of SMAP’s albums. It became popular after being selected as the main theme of a TV drama and was released as a single in 2003. The number of record sales which amounts to about 2 million copies hints at its explosive popularity.

People may instinctively recall this popular phrase from its lyrics ‘NO.1 ni naranakutemo ii motomoto tokubetsuna Only one’ (You don’t have to be number one you have always been a special only one).

This song was released in 2001. It was composed by the band B'z and was the theme song of the World Aquatics Championship in Fukuoka.Many people still regard this song as the Aquatics Championship's inseparable theme.The most memorable  phrase from its lyrics is ‘Soshite kagayaku ultra soul’ (then  your  ultra soul will shine).

This song was released in 1995 and was the opening theme of the Neon Genesis Evangelion anime series. It became a hot topic again after the 2007 film Evangelion: 1.0 You Are (Not) Alone was released and the number of people singing it (in karaoke) gradually increased. The song eventually  got in  first place of JOYSOUNDs karaoke overall ranking and  is right now regarded as the most famous anime song.

This song was released in 1999. Its an original song from NHKs program Okaasan to issho (With mother) and the first song to be made into a CD single which sold more than 2million copies in a short amount of time after its release.

A well known phrase from its lyrics is ‘Kushi ni sasatte dango dango (omission) dango dango’ (Skewered dango dango...) , and the song is characteristized for its progression through a rhythm that makes you want to eat dango. In a sense this is a song dedicated to Dango.

Let it Go～Ari no mama de～

This song was released in 2013. It’s the theme song from Disney’s  Frozen sung in Japanese by Matsu Takako.

The song rose at the top of the JOYSOUND annual karaoke rankings the following year in 2014. Many kids hum its famous lyrics  ‘Ari no mama no sugata miseru no yo’ (Show your true self). In a sense this song has become a social phenomenon.

During the Heisei era popularity shifted from Enka ballads to JPOP. Although many songs were produced during this era 'Sekai ni hitotsu dake no hana' is the song that is considered to have reached an astounding record in sales and most people remember.

I picked only 5 songs for this article  but there are many other famous hit songs representative of the Heisei era. And I anticipate seeing what kind of songs will be recorded and remain on peoples minds during the Reiwa era.