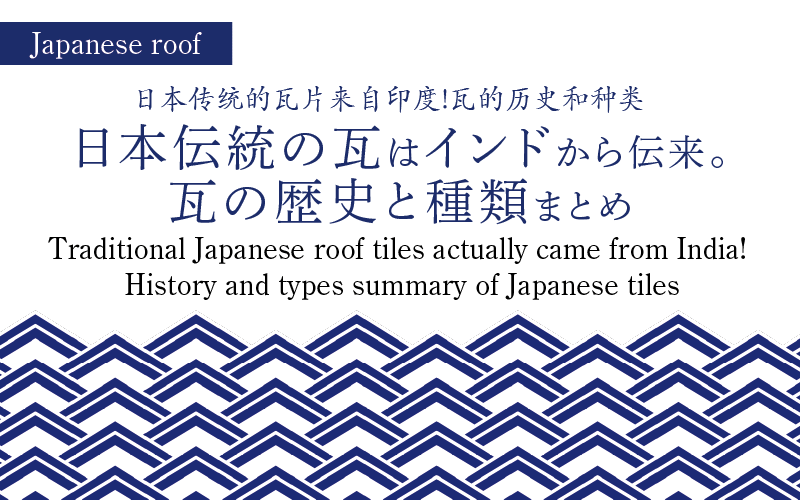 It is called “Kawara” the traditional Japanese roof tile, used since a long time ago, and considered as one of the many aspects of the Japanese traditional culture which blend into the contemporary everyday life. At ADDD-Link we have already held traditional “roofing experience” events in the past, enjoyed by quite a lot of foreign visitors.

Even though almost all Japanese don’t know their origin, the roof tiles they use actually came from India long time ago. This article will try to deepen their history as well as presenting a summary of the various "Kawara" types.

There are various theories about the origin of Japanese roof tiles, but the one that sees them arriving to Japan from India through China during the Asuka Period seems to be the most credited. The name itself seems to be originated from the sanskrit word "kapara”, which is said to have been a predecessor of the modern roof tile.

The Asuka Period saw an increasing spread of the Buddhist religion. As the number of temples was growing as well, roofs built with tiles became suddenly popular. We can say that tiles and Buddhist religion had a early connection in a totally unexpected place!

Features of the Kawara

The characteristics of Japanese roof tiles are their durability and strength. Japan is a country with many natural disasters, and the weather changes drastically depending on the season. This is why sturdy tiles are ideal to protect Japanese houses: if not broken by a tornado or a typhoon they would last for 100 years!

The most popular roof tiles which best perform all the necessary “duties” to meet the general Japanese household needs, are the ones from Aichi Prefecture. Not only because they have high fire resistance and earthquake resistance, but also because they are beautifully made and great to admire.

This kind of tile is made from the “clayey soil” of Awaji Island , which gives it a fine texture and a soft-looking finish. It is also characterized by a high aesthetic performance and high resistance to fading and discoloration.

Sekishu tiles, with their characteristic red color, are made in the western area of Shimane Prefecture. Being produced in an area near the sea, they have high resistance to salt damage, corrosion, discoloration and acid rains.

Being baked with a special glaze, this type of tiles are known as "ceramic tiles” or “lapis lazuli tiles”. Through this baking process, a glass shield is formed on the surface, making this product extremely durable.

Baked without adding glaze. Also called "Ibushi”, these roof tiles are made through a smoldering process to create a carbon coating on the surface.

Kawara is created through Japanese wisdom handed down from many generations.

What do you think? Although being merely Japanese roof tiles made from various materials and performance, they are in fact an important aspect of traditional culture, created and perfected through long time, by accumulating wisdom of Japanese people, who got used to live together with natural disasters such as typhoons and earthquakes. However, the fact that nowadays much higher structures are built instead of classic housings, makes it difficult for younger generations to appreciate and have interest in the classic roof tiles. It is unfortunately easy to imagine: the number of roof tile craftsmen in Japan is dramatically decreasing.

The first step to take if one wants to pass on the roof tile tradition, is to let many people know about it. We hope this article helped you to become more interested in Japanese roof tiles!