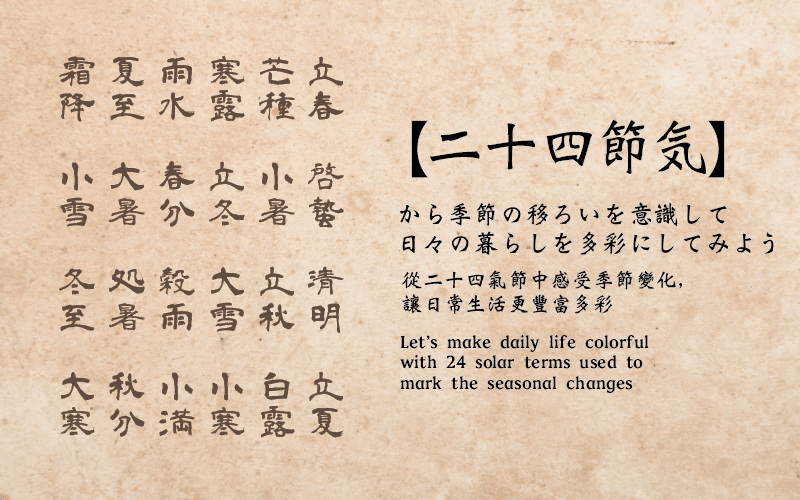 Let me introduce you to the five solar terms with distinctive seasonal events. Please note that the date of 24 solar terms is decided according to the movement of the sun, so it might change by one day depending on the year.

In a non-leap year, March is a seasonal event called Keichitsu (啓蟄) of 24 solar terms. Keichitsu means that hibernating insects are coming out from the ground, and those insects resume their activities during this term.

Also, thunder around this period is called “insect awakening thunder”. It generally starts after rissyun day, normally on February 3, and it is thought that the sound wakes up the hibernating insects and makes them pop out from the soil. There is also an ancient Buddhist festival called “omizutori”, water drawing festival, at Nigatsu-do of Todai-ji around this time, which has been conducted since the Nara Period. It is said that you can spend your time without any illness if you bask in the sparks that fall from a large torch at the festival.

In a non-leap year, June 6th is known as Boshu (芒種) of 24 solar terms. “芒”(nogi) means the hairy tip of a gramineous plant. Boshu indicates that it is ready for rice planting in general.

It is time for summer insects to get active, too. Although there may not be any mosquitoes in Hokkaido yet, they are already very active in Kyushu and Shikoku. If it were in the not so distant past, we would be spending the summer time with mosquito coils in the corridor in the house.

In a non-leap year, June 21st is known as Geshi (夏至) of 24 solar terms in normal years. It is the day with the longest amount of daylight of the year. People hold festivals in some areas to celebrate the summer solstice. If the weather is good, it is fun to do fixed-point observations in order to see “What time the sun will set ?” with children. Furthermore, hydrangeas bloom around this time during the rainy season.

In a non-leap year, October 8th is known as Kanro (寒露) of 24 solar terms in normal years. Migratory birds fly from the continent to Japan and it is one of the events of the season. The typical migratory bird is a swan. In some areas, schools hold their field day, which is often an event in fall. Children compete with each other in different events on the day. Field days are normally held in a relatively cool climate, so you don’t need to worry about heat stroke.

In a non-leap year, December 22nd is known as Tohji (冬至) of 24 solar terms in normal years. It is the day with the longest night of the year. Christmas comes a few days later, though.

Anyhow, traditionally pumpkin is often eaten on the winter solstice day in Japan. It is said that the tradition started in order to wish for good health. In some areas, it is customary to put yuzu in and take a “yuzu bath”. Eating pumpkin and taking yuzu bath are both related to health.

I have introduced the 24 solar terms and the seasonal events in Japan. What you do changes with the seasons here. Also, when the solar term changes, people realize that “Oh, it’s about that time”, and it is directly related to their everyday life. The seasons subtly change as the solar terms come and go. It is nice to be able to feel the changes.