There are many words that are unique to Japan.

What does wabi-sabi mean? Unique Japanese aesthetics and concepts of beauty 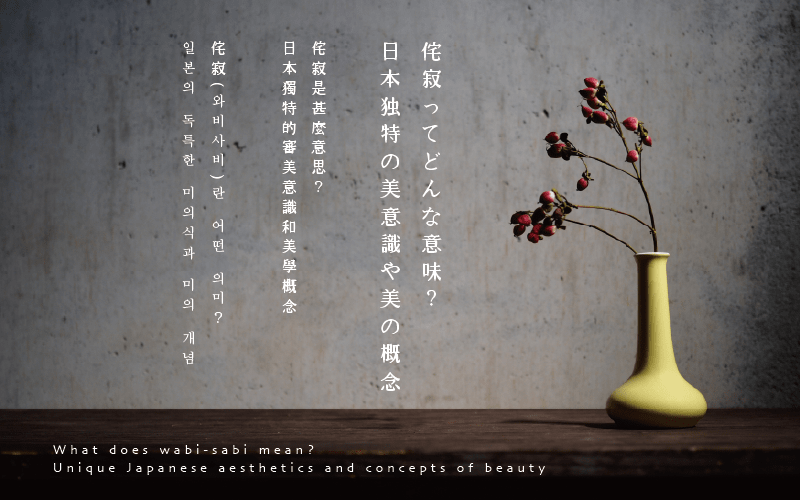 Do you know about wabi-sabi? Foreigners probably think that this word sounds very Japanese. In this article, I would like to introduce wabi-sabi from various angles.

Characteristics of Japanese people you can see from wabi-sabi

Since ancient times, Japanese people have valued “imperfections” and “irregularities,” and have found “ambiguity” as “beauty”. Furthermore, they have found beauty not only in objects and spaces, but also in time and change by refining etiquette to an art and by stylizing “omotenashi hospitality”. You could say that the attitude of “mastering things’ in the pursuit of “etiquette” and “procedures” has fostered Japan’s unique concept of beauty. In this article, I will introduce words that symbolize the aesthetic sense of such Japanese people.

Miyabi means “glamorous” or “graceful”. The kanji character “雅” represents a crow, and it consists of two parts: “隹” means a bird and “牙(ga)” is a crow’s cry.

Why did the kanji for crows come to mean “glamorous” or “graceful"? You can trace it back to the earliest Chinese poetry book called The Book of Songs. In the book, the poems written at the banquet of the aristocratic society were marked as “大雅・小雅 (taiga・shoga)”, and “雅” was used for their sound of “ga”. Since then, the meaning of “雅” has changed from crows to “banquet scenes in the aristocratic society= glamorous and graceful state”.

Yugen is one of the aesthetic principles of Japanese culture that are in various art forms such as literature, painting, performing arts, and architecture.

Toshinari Fujiwara, a representative poet from the late Heian period to the early Kamakura period, used the word to review waka poems. Since then, the word has been used in medieval song theory and to describe Japanese aesthetic emotion. Yugen is a profound, subtle, and lingering beauty that cannot be expressed in words.

Fuzei means atmosphere, taste, appearance, and state in general. It also means “behavior” or “gesture” in grooming or Noh plays. Fuzei is sometimes used as a suffix following a noun. As a suffix, Fuzei means “an insignificant person”. It expresses humility when used for oneself, but it is derogatory to use it on others.

It is a noun form of the adjective “shibui (astringent)”. Although it is considered to have been a word about taste originally, the word’s meaning greatly overlaps with the concept of “寂 (Jaku)” from Zen of Mahayana Buddhism. As “cha no yu (tea ceremony)” matured, the word has come to express the state of mind in addition to visual and auditory aspects.

Moe describes emotions derived from cute movements and gestures. It is a concept of beauty that has developed mainly in otaku culture, and often refers to 2-D anime characters and worldviews, or girliness. It means “favor”, “affection”, and “ardor”, and is used as a synonym for “cute” and “like”.

Since this is a slang born spontaneously on the internet, the etymology is unknown. The most convincing theory is that they were so absorbed in the beautiful girl characters that they paraphrased the state of their heart being burnt with “萌える(moeru)” instead of “燃える(moeru)”.

“Moru” is another concept of beauty that has evolved from kawaii. It means to increase in great deal more than the original.

The aesthetic sense of moru originated from youth language, and the meaning is to “exaggerate”. The word is used when someone is “making the story bigger”, “giving volume to hairstyle”, or “doing flashy makeup”, and such aesthetic sense has become the basis of youth culture.

In Japan, there are some unique words related to nature and weather. Foreign people may be unfamiliar with those words because they do not make sense to them. Let me introduce a few of those words in this article.

Although the kanji character for spring, “haru (春)” is used in koharubiyori, it is not about spring weather.

Koharubiyori refers to the mild and warm climate from late autumn to early winter. The warm climate that resembles spring is called “koharu (小春)”, and it began to be used as another name for October in the lunar calendar. October in the lunar calendar is currently around November to early December. “hiyori (biyori in koharubiyori)” means “climate”, “weather”, or “sunny weather”.

There are two meanings to “kitsune no yomeiri”. The first meaning is to “rain when the weather is sunny”. The second meaning is “a line of will-o’-the wisps in the mountains like a marriage procession”.

There are various theories to why sun showers are called “kitsune no yomeiri”. One of them is because it was believed that sun showers were an unnatural phenomenon. It is known in modern times that sun shower happens when “clouds are washed away and only the rain falls” or “rain that falls in the distance gets swept away by strong winds and falls in a sunny place”, but it was a strange and mysterious phenomenon to people in the past.

The thick leaves block the dazzling sunlight, and soft, pleasant light pours in. The interesting feature of komorebi is that the light looks streaky. Deeper the woods or the forest is, more sunlight gets blocked, and the light that comes in through the small gaps turns into many beautiful bands of light. Such scenery with komorebi gives peace and solace to people.

Up till this point, I have explained wabi-sabi and other Japanese words. There are many words that are unique to Japan. I would be happy if you could feel even the slightest bit of Japan from those words.