Characters and eating habits are different depending on the region even in Kansai. 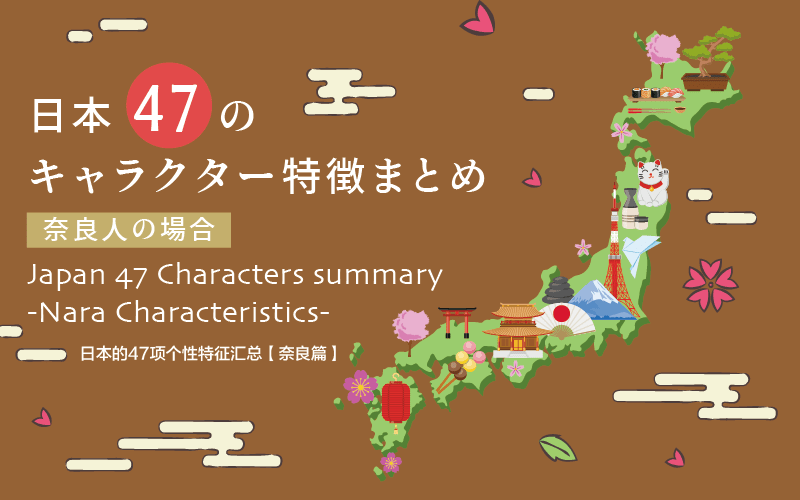 When you mention Nara, you have to mention both the Great Buddha and Nara Park. Some people say Nara doesn’t have much presence compared to the neighboring prefectures, Kyoto and Osaka, probably because both of them have very strong characteristics in many ways, but that doesn’t really bother people from Nara at all. "The Great Buddha and Nara Park alone are great enough, haha," they mutter with a warm laugh. That is how people from Nara are.

The great Buddha and Nara Park are not all that Nara has to offer.

If you are surprised by the size of the Great Buddha and the free-range deer, there are actually many other things in Nara that may surprise you.

First, "No.1 piano per household rate"

Even now, the piano is a luxury item. When you consider the fact that taking lessons also costs a fair amount of money, you realize the fact that Nara has the highest piano-per-household ratio in the nation probably means that people from Nara have a surplus of money.

Next is " No.1 Cram School Expenditure"

Nara is said to be an educational prefecture, and there are certainly many people who are enthusiastic about education. As a result of spending a lot of money on cram schools, Nara has the highest enrollment rate to Kyoto University and Osaka University in Japan.

Is it true that Nara was the capital of Japan before Kyoto?

There is a mnemonic device that goes “Nanto (710) Utsukushii Miyako Daro,” which translates to “What a beautiful capital it is!,” Heijokyo in Nara was the capital of Japan back in the year 710 before Kyoto. But because the capital moved to Kyoto about 80 years later, people from Nara never bring it up. However, internally, they do think “it was originally Nara!” In other words, they do have a secret pride in their history.

Nara is also famous for having few natural disasters. Some say that in the event of a natural disaster, the "Great Buddha Shield" gets activated in the sky. The fact that there are few natural disasters leads to peace of mind. The laid-back character that is associated with people from Nara might be proof that life in Nara has always been peaceful.

When do the laid-back people from Nara get angry?

“Kidaore no Kyoto” and “Kuidaore no Osaka” are commonly used expressions to describe Kyoto and Osaka, which means people spend a lot of money on clothes in Kyoto and food in Osaka. In Nara, people are said to be “Nedaore no Nara,” which means people love to sleep in Nara. It may come from their laid-back personality, as if they are following the Japanese proverb that says “sleep and wait for good luck.”

People from Nara like to do things their own way, and more than anything else they don’t want their pace to be disturbed. Some people think that those from Nara can not keep up with the fast-talking Osakans, which is true, but people from Nara think they have their own pace. That’s why they can get upset when their pace is disturbed.

People from Nara are the serious type that strictly follow rules and are very disciplined, but they are also said to be pretty adaptable. However, they never lose themselves.

To summarize, people from Nara are very nice!

People from Nara are good at setting a peaceful mood, which may be because people from Kyoto and Osaka are more assertive. People from Nara never butt in - they are not only quiet, but they also do their role properly.

I dare to say it is no exaggeration that Kansai is unified because of the people of Nara!