How much do you know about Japan earthquake?

"Tokyo Magnitude 8.0" Learn about disasters through the anime of a disaster in Japan 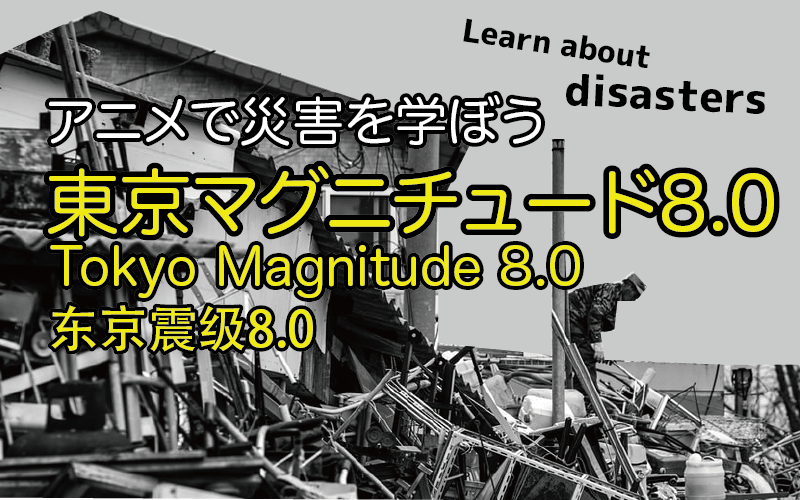 The other day, Tokyo Magnitude 8.0 omnibus edition got in the Twitter trend. Those who are following Twitter in Japanese probably have noticed the trend and wondered what is all about. This article will introduce the Tokyo Magnitude 8.0 and earthquakes in Japan.

Tokyo Magnitude 8.0 is a Japanese animation about earthquakes, it was released in 2009, and DVD and Blu-ray is available now. It was also on Amazon prime video till June 3rd, 2020.

Tokyo Magnitude 8.0 features the following characters: Mirai, 1st grade in Junior high school, Yuki, 3rd grade in elementary school, and Mari in 30s. Mirai and Yuki go to see a robot exhibition in Odaiba Tokyo, where they will be hit by a large earthquake with magnitude of 8.0, and they will meet Mari-san, a female in 30s, and then head to Setagaya where they live. On their way home, they’ll encounter unexpected things caused by the earthquake. Can all 3 of them make it to Setagaya? Please check out the animation if you’re interested.

Earthquakes are Unavoidable as long as you’re in Japan.

The title may be shocking to you. As a matter of fact, Japan is called Earthquake prone country, and 20% of all the earthquakes on the earth are occurring around Japan. (According to Japanese government) Considering there are some countries or regions never hit by earthquakes, the number of earthquakes in Japan is extraordinarily.

Concerning recent major earthquakes, the Great East Japan Earthquake occurred in 2011. The major earthquake and tsunami caused severe damages to the area, and the tsunami was so enormous that even reached Hawaii and the mainland of the USA. Although it’s been 9 years since the earthquake occurred, the damages are still visible. Back in 1995, Kansai region was also hit by the Great Hanshin and Awaji Earthquake. Building, houses, and even highways collapsed at the time.

Nevertheless, it may be a little hard to imagine all the damages could be caused by an earthquake, and that is when Tokyo Magnitude 8.0 comes in handy, the animation will help you to have a better understanding of earthquakes and how to prepare for one.

It trended on Twitter because its omnibus edition was on aired on TV.

"Heard Tokyo Magnitude 8.0 omnibus edition was on aired, all the episodes are available on Amazon prime, so check them out. The animation of damage is very realistic. Unable to watch the final episode without tears and goose bumps."

"Frequently discussed animation themed disaster. Shows fearfulness of earthquakes and a harshness of the real life. Heartbreaking storyline makes you cry...especially the 2nd week... I reconfirmed that I can’t thank enough for being able to live an ordinarily life."

"Recently trended “Tokyo Magnitude 8.0” just finished the episode 2, can’t stop crying. Reminds me of the major earthquake... I was in Tokyo and barely had a damage to myself though. Ever since then, I never worn heels at work nor privately so I can walk home where my daughter is even if the train stops..."

Need to stay precautions all the time.

This article covered the recently trended animation, “Tokyo Magnitude 8.0”, and facts of earthquakes in Japan. Since earthquakes can’t be estimated, it’s important to be prepared in advance. It’s a good idea to learn about the earthquake through the animations and have emergency preparation supplies ready. Although the animation was based in Tokyo, there should be a lot of valuable things can be applicable to Kansai too.