Back to the events
募集終了

Free
(Entrance to the park is also Free) 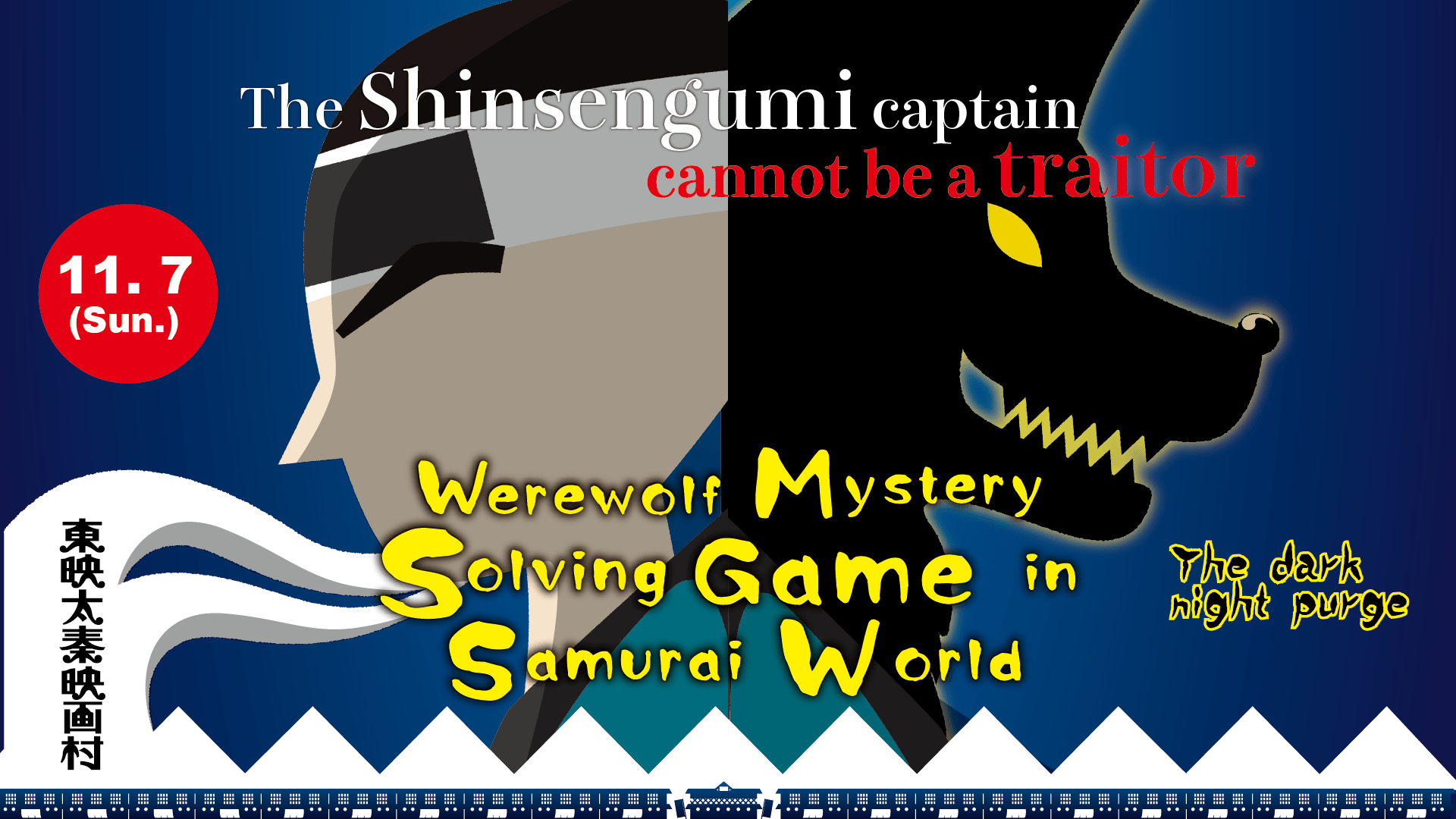 Another exciting event of Toei Kyoto Studio Park is here!

Free
(Entrance to the park is also Free)

※All participants are required to fill up the survey.

Search the venue, find and solve the mystery, and use the answer to find out who the traitor is. An experience-based game with random elements where dificulty level and results change depending on the actions and reasoning power of the participants; with murder mysteries and immersive theatrical elements as its axis, this game is based on both mystery solving games and the werewolf game.
This event, based on the board game “The Werewolf”, popular for enjoying conversation and reasoning, is inspired by the popular Shinsengumi(police force) movies and anime called the “Wolf of Mibu”. The open film set of the Studio Park where the event is set, recalls Kyoto at the end of the turbulent Edo period, and was remade as an authentic three-dimensional version that you can experience as a soldier of that time.

Story
Turmoils increase in Kyoto at the end of the Edo era. Satsuma, Choshu and other clans, the Fallen sect and the Samurai sect, everyone’s thoughts are swirling around the city. The police force(Shinsengumi) which gained fame in the Ikedaya incident is in the midst of that. Vice commander Toshizo Hijikata is recruiting and training new soldiers to strengthen his military power to counter the rapidly expanding group of enemies. One day, it is announced that soldiers with particularly excellent results in battle will gather and report to their captains.Rookie soldiers are quite nervous in front of the four captains. Deputy Hijikata appears with shocking information. “Among the four captains there seems to be a traitor who is connected to the enemy!” Captains and soldiers deny it, but cannot hide their true emotions. “Because all of them have denied, we have no other choice but to reveal the traitor!” Hijikata then orders the soldiers to explore the city and find evidence about the traitor. Once he obtains as much information as possible he sets out on a night exploration of the city to finally smoke out the traitor.

①Deputy Director: Toshizo Hijikata
The Devil Vice Commander. He is willing to give up any forgiveness to keep the discipline of the Police force(Shinsengumi).

②First Captain: Hajime Okikura
The best sword wielder in the Police force(Shinsengumi). Kondo and Hijikata have been his comrades since they were in Tama.

③Second Captain: Tadasuke Hara
In the past, Hijikata has reproached him for problems with women.

④Third Captain: Sasaburo Budo
He formed the Goryo Guardians and mediated the police force(Shinsengumi) with Kashitaro Ito, who later left the corp.

In order to prevent the spread of the new coronavirus infection, the entire facility has been coated with “Kino Shield”, a solution with antiviral and antibacterial effects.
Approximately 1,300 items, including the entirety of the 20,000 square meters of the Studio Park, as well as the kimono and costumes worn by the actors, are coated, for our guests to enjoy their experience in the Studio Park with an easy mind.

*This event is not hosted by jimomin

※All participants are required to fill up the survey.

Would you like experience working at a Japanese landscaping company?